Jane Morris and I have more in common than just a striking physical resemblance. As adolescents, both of us became the lover as well as the muse of an artist who was 11 years older. Thus, we were both shaped by the masculine viewpoint of the older artist, who gratefully allowed himself to be inspired by our youthful looks.

When I was 16, I entered into a relationship with photographer Sipco Feenstra, who photographed me on a regular basis up to and including my 29thyear. In this way, he unknowingly registered my natural likeness to Jane Morris. For that reason I have digitalised this personal archive. 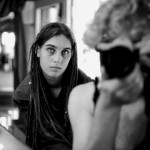 Jane Morris met Rossetti when she was 17 years old and, since, derived her public image from his artist’s viewpoint and from the art he made of her. Jane Morris’ intriguing appearance deviated from the beauty ideal of the time. She inspired Rossetti to create a new ideal image, of which she became the personification.

The poses in which he had her photographed in 1865 were later used by him in several paintings. However, he did not paint her natural beauty as such, but represented her as a mythological goddess, an archetype. 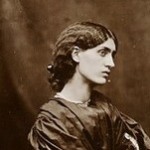