In this travel report I’ll first describe how I represented Jane Morris at the Pre-Raphaelite Sisters: Making Art Conference at the University of York on 12-13 December 2019. The Conference was held in conjunction with the Pre-Raphaelite Sisters Exhibition at the National Portrait Gallery (from 17 October till 26 January 2020, London). In Manchester and London I also visited some musea.

The mutual goal of the conference and exhibition was to explore the overlooked contribution of twelve women important to the iconic artistic movement Pre-Raphaelite Brotherhood. Featuring new discoveries and unseen works from public and private collections across the world, this show reveals the women behind the pictures and their creative roles in Pre-Raphaelite’s successive phases between 1850 and 1900.

We are delighted to inform you that we would like you to present a short piece on (or as) Jane Morris as an introduction to our open discussion session on the afternoon of Friday 13th December. The session will be aimed at The Future for the Pre-Raphaelite Sisters, and your innovative approach is just what we are looking for.

While meeting the other speakers during two intensive and inspiring days I especially enjoyed revealing to Elizabeth Prettejohn how she had changed my life… As it happens, she was the curator of the exhibition ‘Dante Gabriel Rossetti’ at the Vincent van Gogh Museum in 2004. It was a photocopy from an article about this exhibition that would become the starting point for my involvement with Jane Morris. Learning that Prettejohn thought my video was very sensitive was a pleasant surprise for me.

My video also interested curator Helena Cox and after showing her one of my research booklets I had to promise to make another one juxtaposing the photographs made of Jane with my own. We agreed on creating an exhibition together at the Beverley Art Gallery (2024). 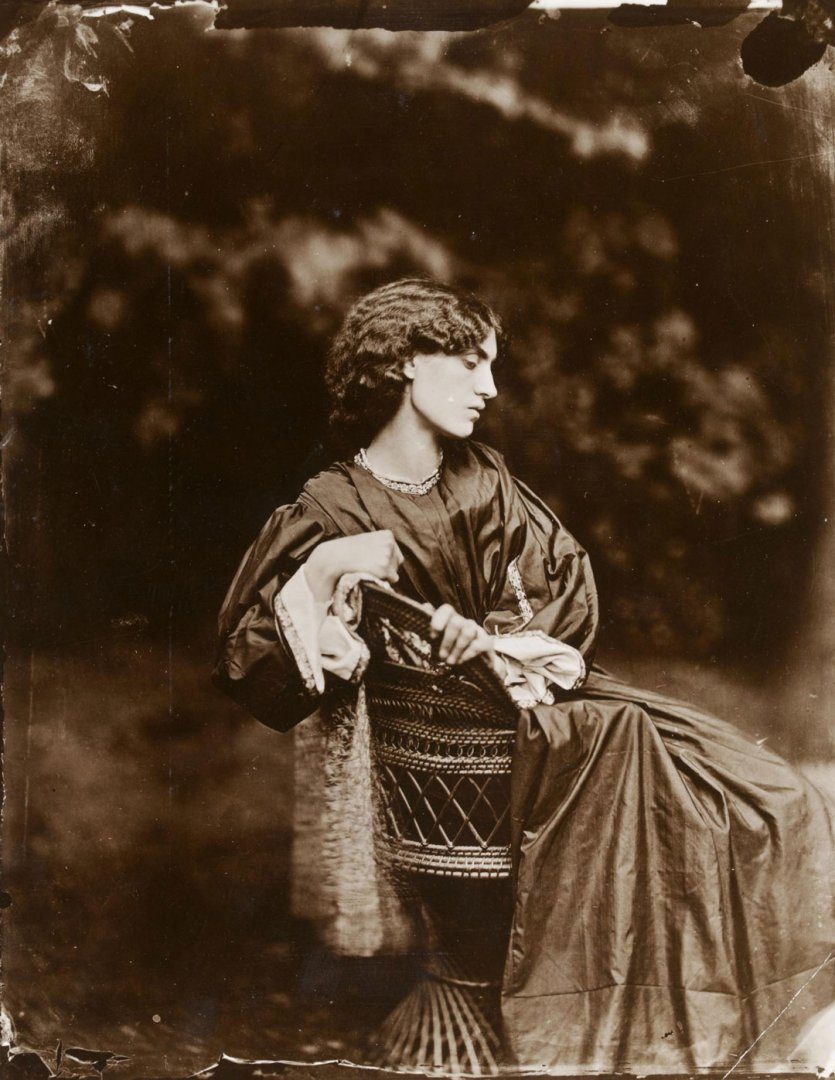 From now on I will desribe the other exhibitions I visited, starting with the Manchester Art Gallery where I visited the depot and archives with curator Hannah Williamson. Browsing through their artist files I unexpectedly held a poem by Dante Gabriel Rossetti in my hands, written to accompany his painting ‘Astarte Syriaca’, which is on permanent display in the museum. 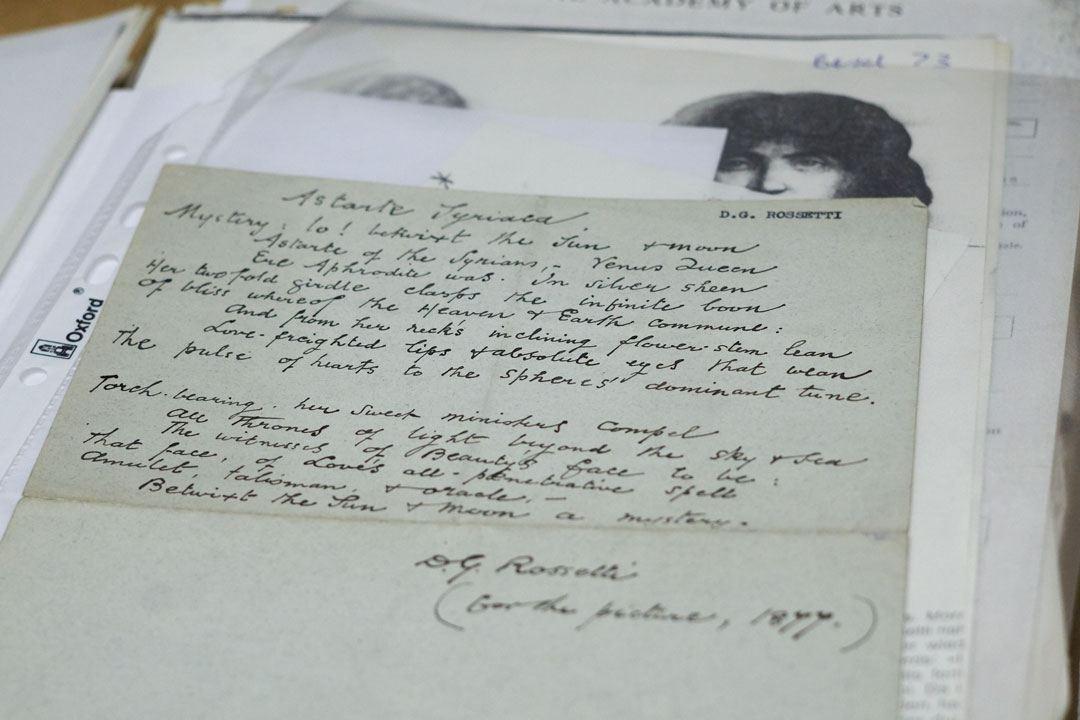 The highlight of my trip was a visit to the British Library, where I spent a few hours reading Jane Morris’s notebooks, filled with several different styles of lettering. Sometimes half a millimeter in height, sometimes written in spirals or in different directions. Definitely worth a second visit, taking with me a sharpened pencil and a magnifying glass, as sadly no photography is allowed. With this illuminated poem, shown at the Pre-Raphaelite Sisters exhibition, you’ll get a glimpse of Jane’s lettering nevertheless. 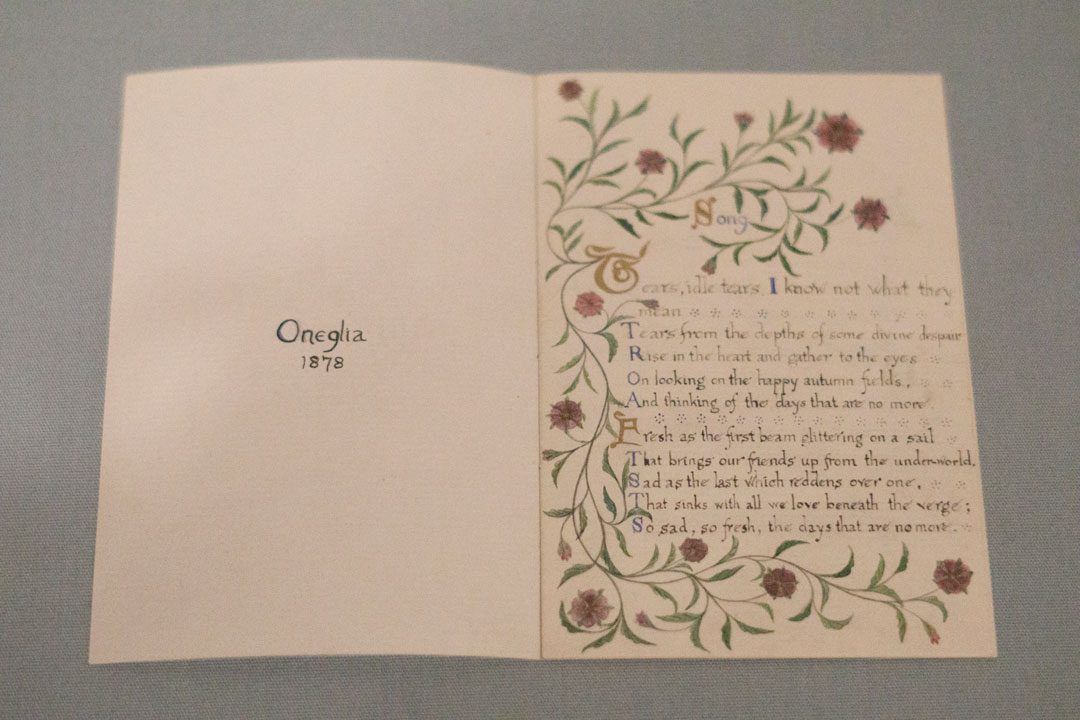 This poem is one of the ‘featured new discoveries and unseen works from public and private collections across the world’. True, I never before saw the lock of Lizzie Siddal’s hair and the asylum entry of Fanny Cornforth is also an intriguing item. But the exhibition didn’t provide me with new insights about Jane Morris’s artistic endeavours. I do understand why the displayed items had been chosen, they paint a picture with a broad brush.

As soon as you enter the room dedicated to Jane Morris you will notice the famous painting ‘The Day Dream’ by Rossetti and how it very naturally blends in with the paintings Edward Burne-Jones made of his own muse. It is a well-known fact that the artists of the Pre-Raphaelite Brotherhood used mythological stories to represent their own lives and it is almost impossible to leave this aspect out.

On the wall next to those large paintings are more intimate drawings of Jane Morris as Guinevere, showing the very early efforts of both William Morris and Rossetti to capture their new stunner. It would have added a new dimension to their triangle love story if the back of the painting ‘La Belle Iseult’ would have been displayed, on which William ‘proposed’ to Jane by writing the words ‘I cannot paint you but I love you.’ Instead, one of the eight versions of the painting ‘Proserpina’ is used to finish this theme ‘Model, Wives and Mistresses’. 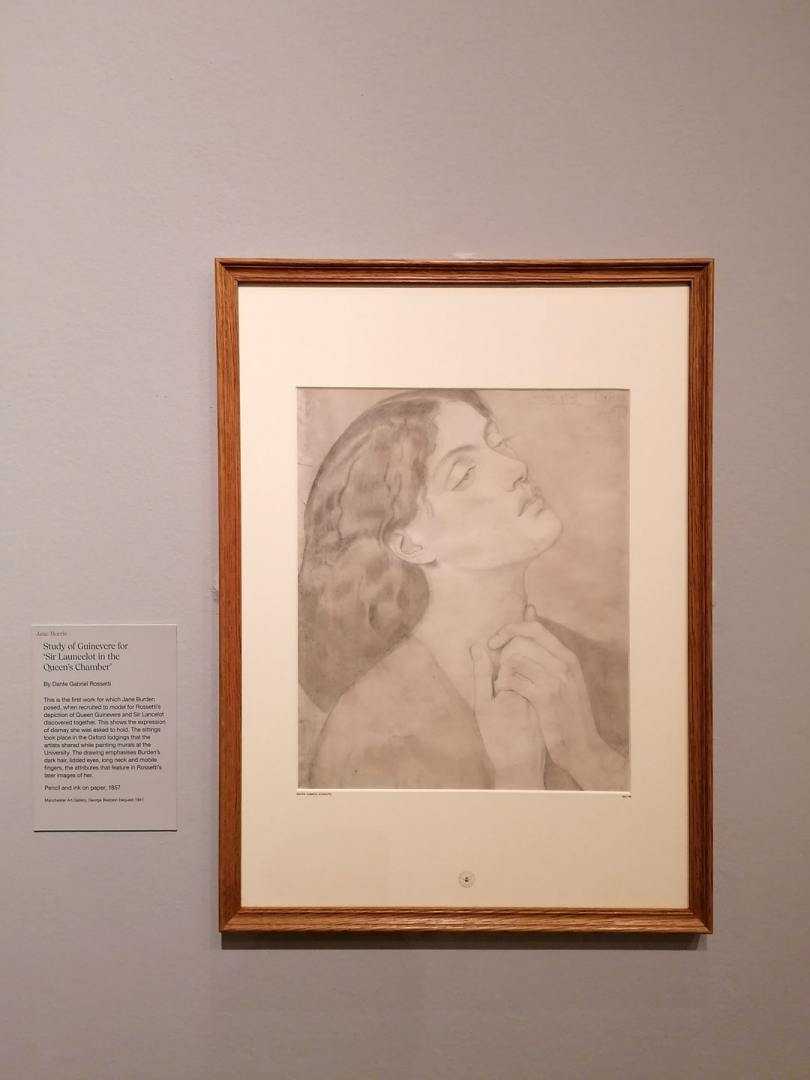 On the wall opposite there is a selection of photographs made of Jane Morris in different moments of her life. Images from the wet plate collodion session, in which a 25 year old Jane was posed by Rossetti, are hung next to photographs of Jane as an elderly lady posing in her garden of Kelmscott Manor. A studio portrait made during one of her frequent travels to Italy is showing Jane in her forties, with some friends. One of them being TJ Cobden-Sanderson who was persuaded by Jane during a dinner party to take up bookbinding.

It is my guess that the curators wanted to stress the importance of mutual inspiration. Close to the photographs hangs a caricature made with pencil by Edward Burne-Jones, depicting Rossetti’s obsession for his muse Jane. The catalogue says he made it to impress his own muse Maria Zambaco who was an artist herself and is represented in the following room. Other female artists included in this exhibition are Marie Spartali Stillman, who made the watercolour of Kelmscott Manor. It is hanging next to one of the studies for ‘the Hour Glass’, which would become the last painting Jane Morris sat for. The other study by Evelyn de Morgan can be seen in her own room, before you enter Jane’s. 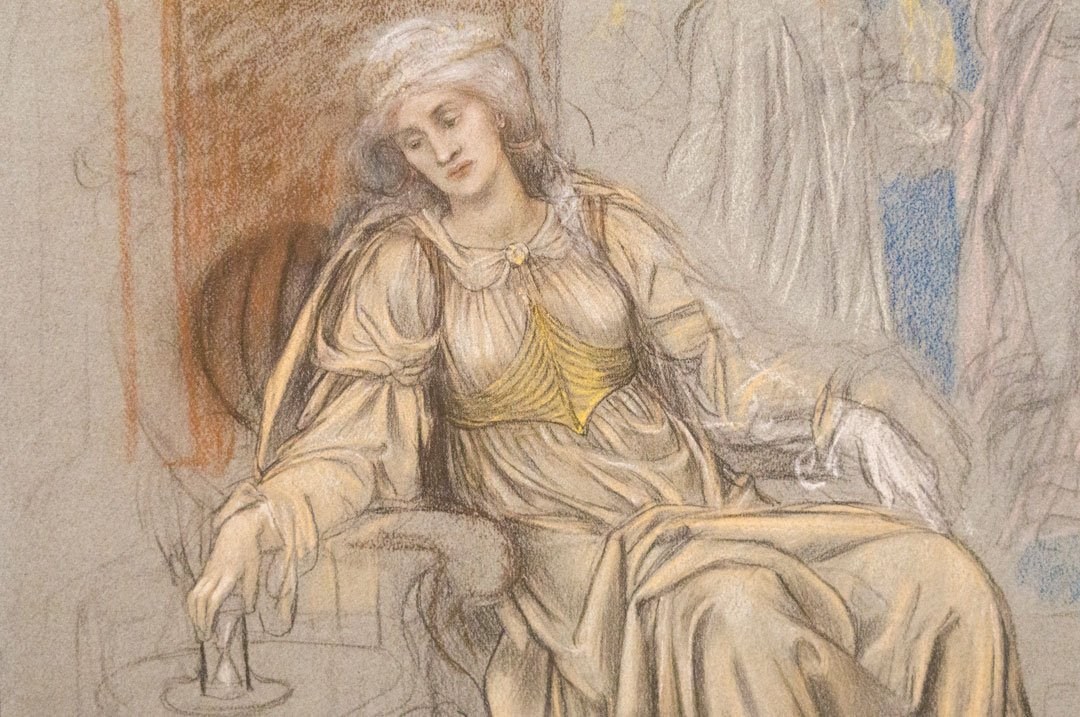 In this exhibition Jane Morris is depicted from the viewpoint of her close contemporaries. Images made of her greatly outnumber the items made by herself. The embroidered evening bag and the illuminated poem ‘Oneglia’ do show her talents but I have seen more impressive embroidery by Jane and I think it is a missed opportunity to highlight Jane’s own creativity and influence as an artist. 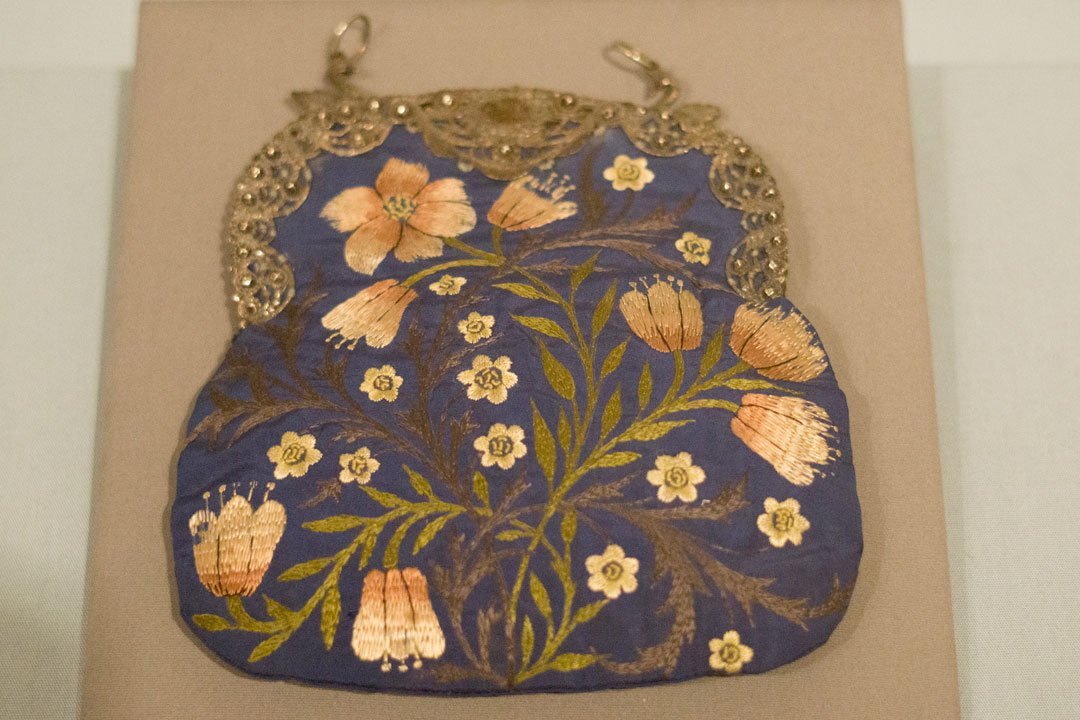 However, I shamefully have to admit that my own research- and art project was also limited by my own viewpoint as her ‘contemporary double’. One of the recurrent themes was ‘muse versus artist versus woman of flesh and blood’.

It is my underlying intention to free Jane Morris of the myth that has been created around her. I have created a role for myself, based on Jane Morris’s history to complement and modernise her persona.

After participating in the Conference ‘Pre-Raphaelite Sisters: Making Art’ and visiting the exhibitions and archives described above I became very curious to find out who Jane Morris herself was as an artist.

I would like to finish this travel report with some wise words of Jan Marsh, who curated the exhibition and edited the accompanying catalogue. As one of the key speakers during the conference she sharply answered critical questions about the title of the exhibition that suggests there actually existed a coherent movement of Sisters. She would welcome a dialogue: ‘How would you call it?’
She also explained why the famous image ‘Proserpina’ was used once again to promote the exhibition and why the information about the images was so detailed. ‘Exhibitions must serve the least informed.’
Marsh also suggested that if you would have a critical idea about the exhibition you should propose your ideal exhibition yourself. As I was sitting right next to her I jumped at the chance of creating my own interventions in the National Portrait Gallery or any other museum with a Pre-Raphaelite collection where my Jane Morris related work would fit in. But unfortunately the National Portrait Gallery for example will be closed for at least 3 years as from this summer.
The exhibition ‘Pre-Raphaelite Sisters’ runs until January 27, 2020 so grab your chance to see it or visit my Instagram account for more spoilers. You can also sign up for my Dutch or English newsletter (on the contact page) if you would like to be informed about the progress of my project ‘Reflections on Jane Morris’.