Proud to announce I will be representing Jane Morris at the Pre-Raphaelite Sisters: Making Art Conference. To be held at the University of York on 12-13 December 2019, in conjunction with the exhibition Pre-Raphaelite Sisters at the National Portrait Gallery (from 17 October till 26 January 2020, London).

The exhibition explores the overlooked contribution of twelve women important to the iconic artistic movement Pre-Raphaelite Brotherhood. Featuring new discoveries and unseen works from public and private collections across the world, this show reveals the women behind the pictures and their creative roles in Pre-Raphaelite’s successive phases between 1850 and 1900. 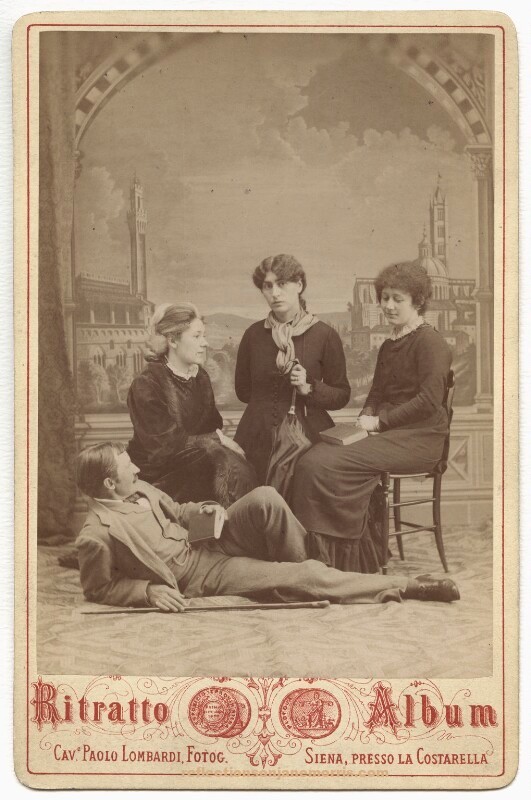 According to the two-day Conference this contribution demands recognition. It will explore the roles played and diverse contributions made by women to the creation of Pre-Raphaelite art.

Glenda Youde: ‘We are delighted to inform you that we would like you to present a short piece on (or as) Jane Morris as an introduction to our open discussion session on the afternoon of Friday 13th December. The session will be aimed at The Future for the Pre-Raphaelite Sisters, and your innovative approach is just what we are looking for.’

With a short video I will be answering the question: ‘We are particularly interested in how you as an artist have interpreted the way in which you resemble Jane Morris as art.’ 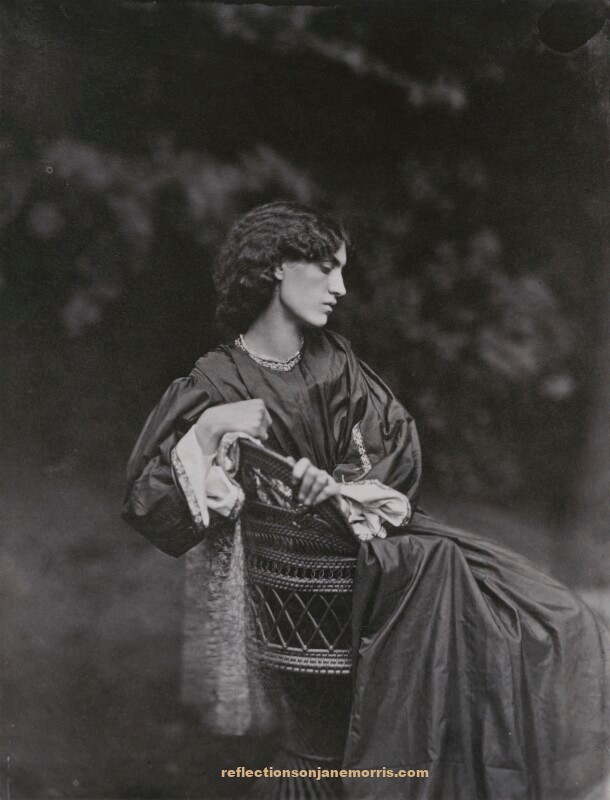 At the group exhibition ‘Verse Aanwas’ my pencil drawings, inspired by Jane Morris her hair, are juxtaposed by portraits in stone by Martie van der Loo.

On show are paintings, drawings, photographs, sculptures and prints made by 13 different artists. From 28 July till 18 August 2019 at Pulchri, Den Haag. 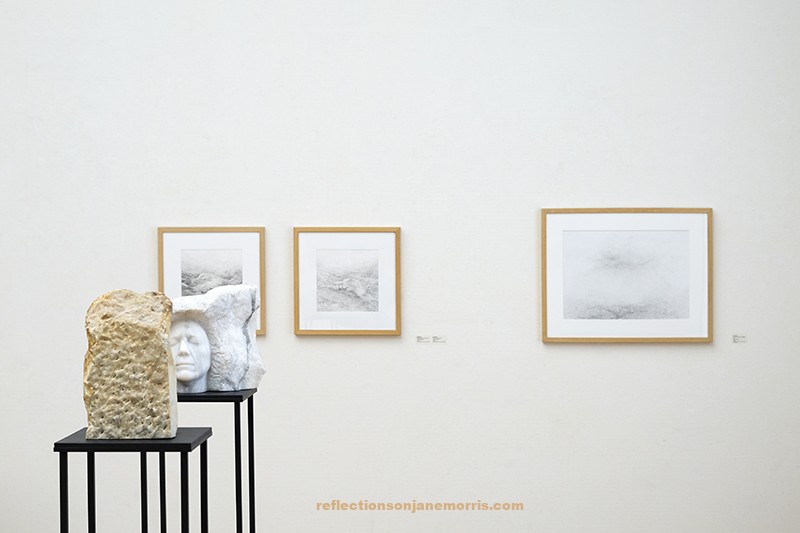 Pulchri magazine published an article about the exhibition (in Dutch). Find a similar fragment in English below, originally written by Klaske Havik in November 2018.

“The pencil drawings of Jane’s hairstyles have been transformed into leading a life of their own in these new drawings. They reach into the depths of drawing itself. The portraits still show traces of thoughts and stories. In the detail of skin and hair lie labyrinthine landscapes in which the viewer can get lost. The muse gradually disappears from the image and leaves room for other, new stories. New, but anchored in the search for the doppelganger, to the self, to the other. They invite you to look the detail and think about what you can read in it.”

For the duo exhibition in Galerie de Molen, it seemed nice to show the development of my drawings, from the start of my ‘Reflections on Jane Morris’ project. 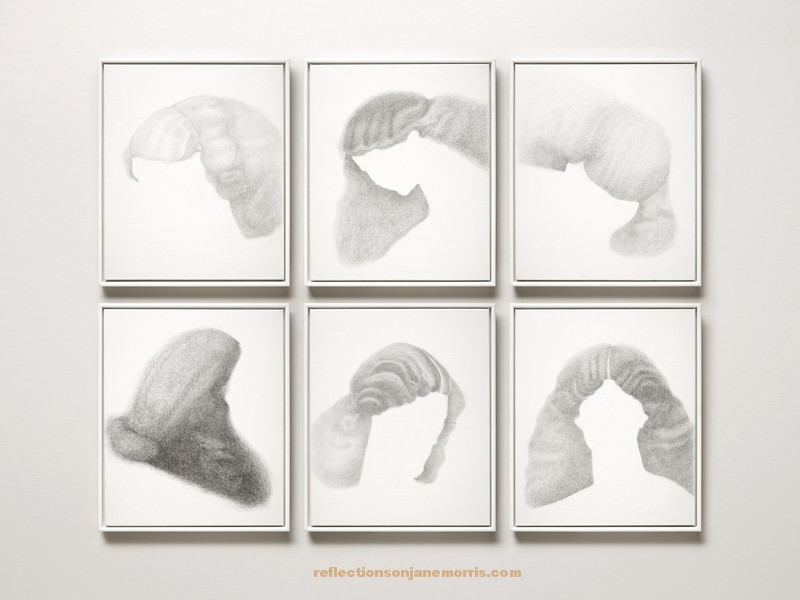 Ten years ago I made a series of pencil drawings of Jane Morris’ hairstyles. This series was the starting point for my recent series of drawings in which the muse gradually disappears from the image and leaves room for other, new stories. 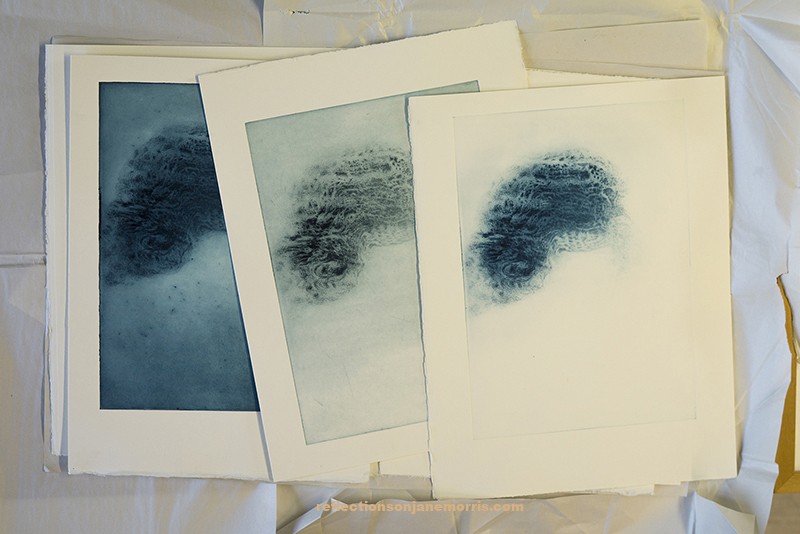 Recently I started making photographic etchings from these series. With printing in different colours, I investigate the influence of colour, contrast and tone on the experience of my original drawings in grayscale. 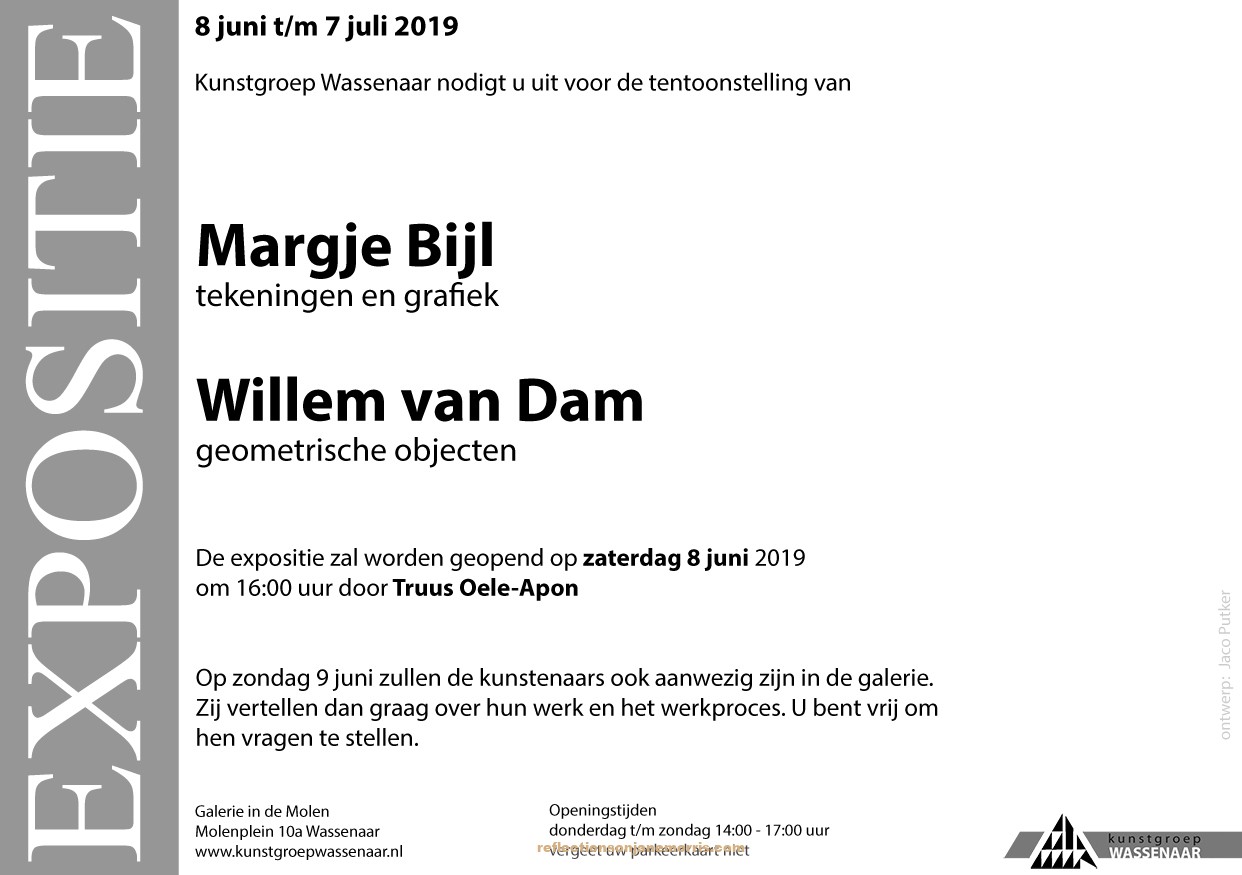 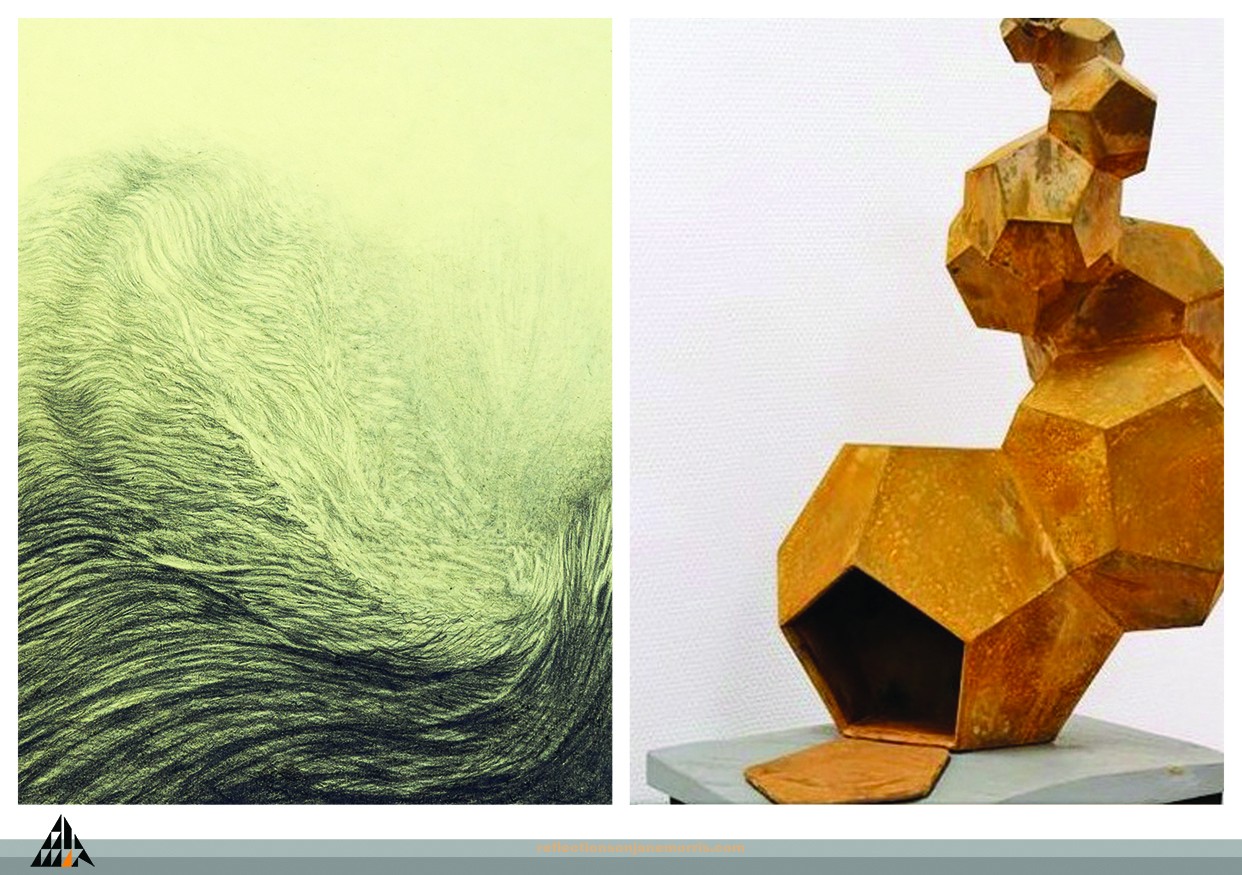 Pulchri magazine published an article about the ‘van Ommeren de Voogt Prize 2018′. Klaske Havik wrote the piece about my work.

Winner Paul Nassenstein, Sandra Thie and myself are awarded with an exhibtion at the van Hardenbergzaal in Pulchri. I am showing a new series of 14 pencil drawings, inspired by Jane Morris’ hair. 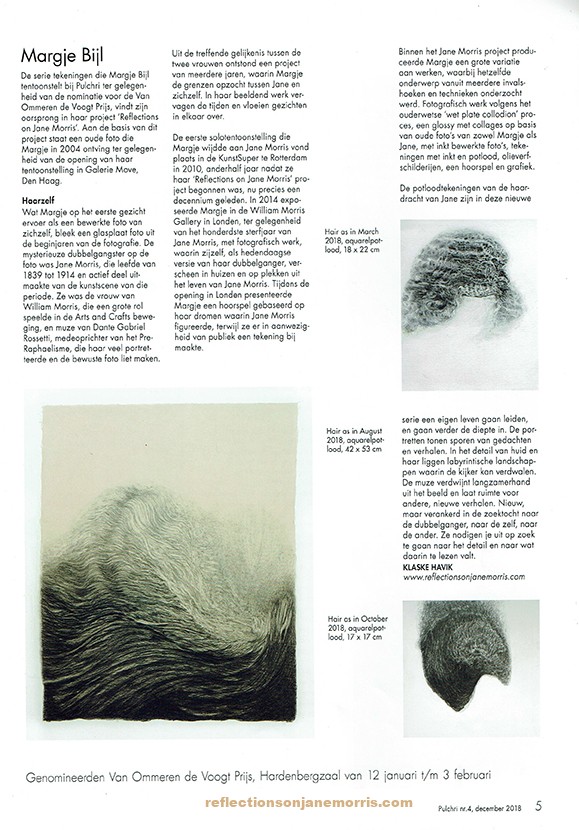 The book ‘Geen woorden maar beelden, 25 jaar Galerie Atelier Herenplaats, Outsider Art in Nederland’ is also available in English. In almost 300 pages filled with wonderful images and texts, it describes the journey of Herenplaats. It is an art academy for mentally and physically challengend artists, where I enjoy teaching linocutting and etching.

The bookpresentation was held on 29 June 2017 at the Kunsthal in Rotterdam. Watch the crowdfunding clip for more details or visit the studios and exhibitions at Galerie Atelier Herenplaats. Schietbaanstraat 1, 3014 ZT Rotterdam. 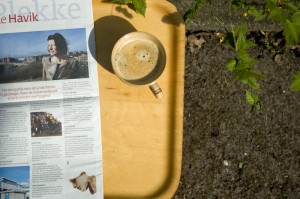 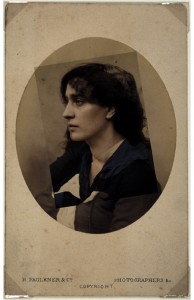 Commemorating Jane Morris’ birthday, as she was born on 19 October 1839, I superimposed a colour portrait of me, taken by Liselotte Fleur for the editorial about my work in Lone Wolf magazine, on top of a black and white photo of Jane Morris.

Doublechecking the date I suddenly realised there was another photograph of Jane Morris from the same series. 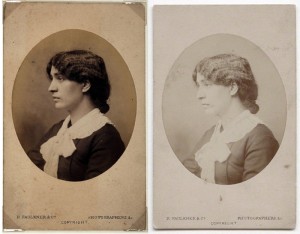 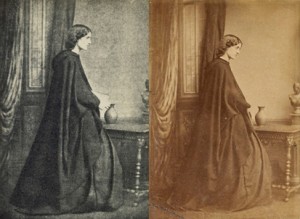 A few weeks ago I stumbled upon another photograph of Jane I never saw before (left), even though Stephanie Graham Piña featured it on her website Lizzie Siddal several years ago. The image on the right is featured in the ‘Album of Portraits of Mrs. William Morris (Jane Burden) Posed by Rossetti, 1865’. The Album is in the Victoria & Albert Museum and I highly recommend making an appointment to view the famous photographs of Jane Morris in person!

I am proud to announce that Lone Wolf magazine, features an interview with me in their latest issue #12; ‘Philosopher and Muse’. The editorial ‘The Silent Muse’ is written by Natalia Borecka and photographed by Liselotte Fleur.

Read The Silent Muse in this PDF or find the editorial in chapter 2 of this preview of Lone Wolf issue #12. 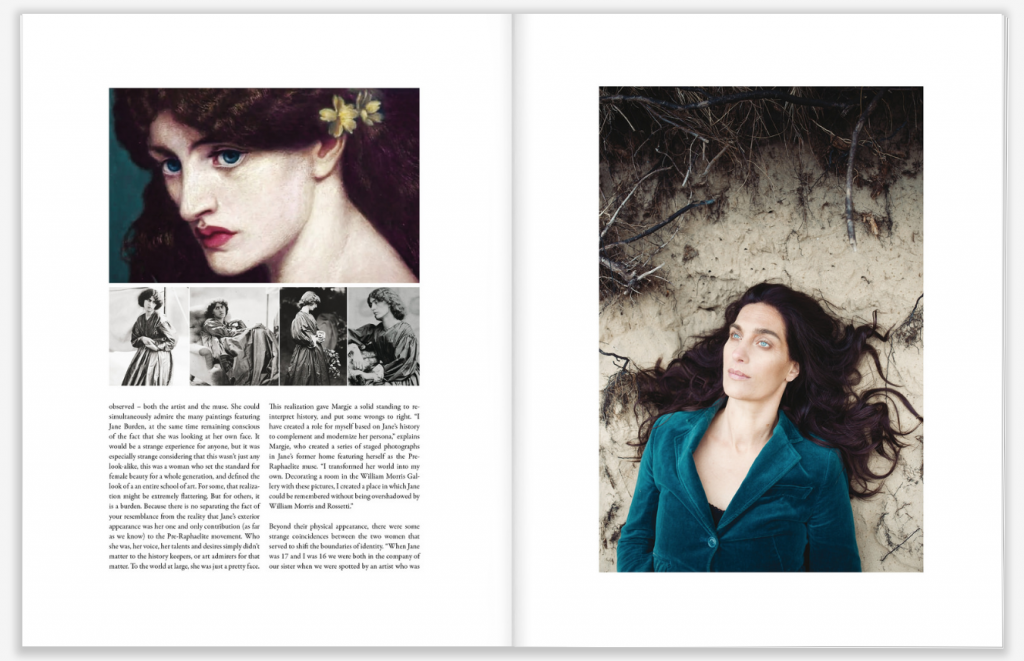 ‘…Suddenly, a strange new prospect presented itself. Here was an opportunity to give someone pushed aside by history, the voice she so deserved. Here was a chance to give Jane her moment in the spotlight, not as a muse, but as a flesh and blood woman. And so, Margje set out out to turn a fading myth into a breathing story, using herself as Jane’s surrogate…’

Photographs from my series ‘A Memory Palace of Her Own’ are exhibited at the William Morris Gallery from 11 January to 9 March 2014. The private view was held on 9 January and included a Q&A with the author Kirsty Walker who wrote this review. 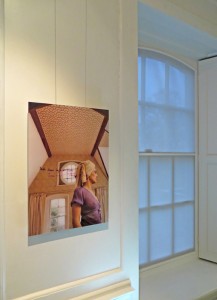 Excerpt from an email I received from the curator of the William Morris Gallery, Carien Kremer: ‘We would like to offer you a slot in our 2014 programme, showing the photographs in the Discovery Lounge…It would be great to mark the commemorative year with a contemporary take on Jane’. 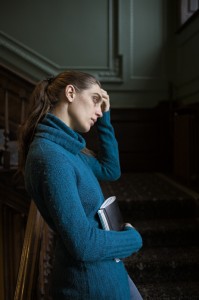 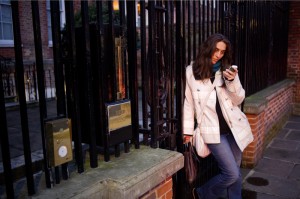 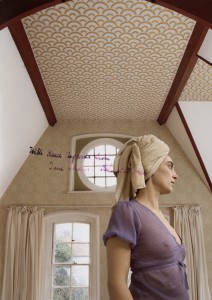 February 4th, 2012, I attended the symposium ‘Treasures of the Collection in Context: The Pre-Raphaelites in the Museo de Arte de Ponce Collection’. Distinguished researchers in the Victorian culture presented papers. Alison Smith, Tim Barringer and Jason Rosenfeld being the curators of the upcoming exhibition ‘Pre-Raphaelites: Victorian Avant-Garde’ in the Tate Britain, London. Franny Moyle, BBC producer and author of ‘Desperate Romantics, the private lives of the Pre-Raphaelites’. Together with the speeches of Sally-Anne Huxtable, Madeleine Vala and Cheryl Hartup, the symposium provided interesting strings of thoughts on the Pre-Raphaelite Brotherhood. 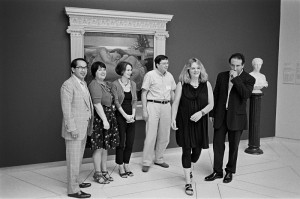 They are posing in front of ‘Flaming June’ by lord Leighton; my favourite of the ‘Treasures of the Collection in Context’. My other favourite is ‘Roman Widow’ by D.G. Rossetti. These two paintings had been traveling as part of the exhibition ‘Sleeping Beauty’ and were exhibited in the Gemeentemuseum of the Hague in the Netherlands. It was the first time I saw a painting by D.G. Rossetti since I was given a photograph of his muse Jane Morris. Spellbound I caught the attention of an artist. 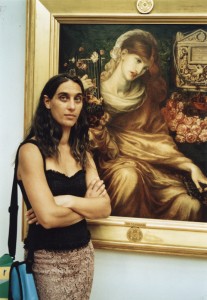 My identification with her is a metaphor for how I see the image of women in modern media. As a contemporary female artist, my struggles with the beauty myth occupied my mind until I visited the symposium and learned about the female issues in Victorian age. Attending the symposium made me understand that the Pre-Raphaelite Brotherhood did not merely represent their female models as objects for male desire. Their art showed social solidarity with the working classes, with democracy and women rights becoming in debate.

Due to the industrialization, many women left the countryside for the city but could not find a decent job there and sadly became prostitutes or even suicidal. The Pre-Raphaelite Brotherhood wanted to rescue these girls of their poor destiny. With their arms tightly locked in each other they roamed the streets hoping to catch new stunners who would model for them. They painted them as to represent injustice for all women in Victorian time. While members of the royal family were painted as if they came straight out the pub, the working class was modeled after Greek beauty ideal.

Jane Morris, the daughter of a stableman, was one of them. She modeled for D.G. Rossetti’s painting ‘Proserpine’. In Greek and Roman mythology, Proserpine was kidnapped to become the wife of Pluto, God of the underworld. She was destined to stay in the underworld half of the year, because she ate a few seeds of a pomegranate. The myth resembles the story of Adam and Eve after the forbidden bite of the apple but also has an autobiographical touch to it. The painting relates to the unhappy marriage of Jane and William Morris and the extramarital affair between Jane Morris and D.G. Rossetti. They were attracted to each other from the start but D.G. Rossetti was already engaged. So, Jane Morris accepted the marriage proposal of William Morris instead and used her intelligence and creativity in climbing the social ladder.

D.G. Rossetti’s fiancée was another ‘rescued’ working class girl: Lizzie Siddal. She was earning a decent income in a hat shop until she was discovered and became the first Pre-Raphaelite supermodel and an artist herself. But her romance with Rossetti damaged her reputation. Men and women were valued differently concerning sex before marriage and adultery. Even modeling for the Pre-Raphaelite painters was considered as the equivalent of being a prostitute. Out of convenience D.G. Rossetti tried to save her reputation by marrying her. However, after Lizzie Siddal bore his stillborn child, she committed suicide. Years earlier, Lizzie Siddal had modeled for Millais’ painting ‘Ophelia’. It represents a transition into the next world as a sensual experience, an orgasm. It depicts female desire. Together with her self portrait, ‘Ophelia’ will be one of the highlights of the upcoming exhibition ‘Pre-Raphaelites: Victorian Avant-Garde’ in the Tate Britain, London. I am also looking forward to see the embroideries Jane Morris made for William Morris’ bed, designed by their daughter May.

After the symposium, the cocktail party at the roof of the Museo de Arte de Ponce was a nice chance to meet the speekers. Days later, a song by the Rolling Stones kept popping up in my mind…You’re just a poor girl in a rich man’s house…I’ll be your knight in shining armour, coming to your emotional rescue…